What is an Anzac?


Why is April 25 so important to Australians and New Zealanders?


Most likely anyone outside Australia or New Zealand would not have heard the term “Anzac.” It stands for Australia New Zealand Army Corps and was first used during WWI. Both Australia and New Zealand were relatively new colonies when WWI broke out, (between Germany and Britain), so their ties with Mother England were still very strong. Most of the young men who died in the mud at Belgium and on the beaches and trenches of Gallipoli were only second generation Aussies and New Zealanders. From a country with a population of almost one million, New Zealand lost 18,000 men and nurses. This was the highest loss pro rata of any nation during both WWI and WWII .

And do you know, all those men and nurses who went to Gallipoli (Turkey, Germany’s ally) in 1915 were volunteers? On that very first day on 25 April 1915, 2,000 Australians died. Another 6,500 were killed or wounded by the end of the week. Australia was second only to Britain for the numbers of soldiers who fought in WWI.

They call it “the Anzac spirit” which took those boys – because most of them were mere boys – through battles along the Western Front at Ypres, Fromelle, the Somme and into the Middle East and Beersheba. The Anzac spirit determines that during wartime, Kiwis (New Zealanders) and Aussies can rely on each other.

The Anzac symbol is the red poppy that represents the wild poppies growing in the fields and roadsides throughout Belgium where some of the toughest battles were fought and where the flower of a generation perished. I’ve seen those poppies for myself, and it is astounding to someone from the Southern Hemisphere that those young men came so far to bleed out on soil so far from home. There is a poem that begins:

In Flanders Fields the poppies blow
Between the crosses row on row,
That mark our place; and in the sky
The larks, still bravely singing, fly
Scarce heard amid the guns below.

We are the Dead. Short days ago
We lived, felt dawn, saw sunset glow,
Loved and were loved, and now we lie
In Flanders fields.

In the days leading up to April 25 Australians and New Zealanders all wear the symbolic poppy. And the Anzac spirit rang true throughout WWII, in Korea and in Vietnam too.

Winston Churchill, as First Lord of the Admiralty, commanded the navy and everything it did. He was removed from that post after the Gallipoli disaster. During WWII he was responsible for leaving Australians and New Zealanders stranded in Greece and on Crete. Methinks Winston thought of colonials as of no account.

World War I, 1914-1918, was the 'Great War', the 'war to end all wars'. Great battles were fought in towns with names such as Fromelles, the Somme, Bullecourt, Messines, Passchendaele, Dernancourt and Villers-Bretonneux. Of more than 290,000 Australians who served in this theatre of war in the Australian Imperial Force, 46,000 were either killed in action or died of their wounds. And remember that many returned wounded in spirit. We now call that post traumatic stress disorder.

I have a personal link to the Great War. My great-uncle William Tielle (nicknamed Teddy) was one of the many volunteers from his district. He was the only boy amongst a large family of girls and at 21 he died of wounds received at Passchendaele. He is listed on the honour roll at the Auckland Museum in New Zealand. 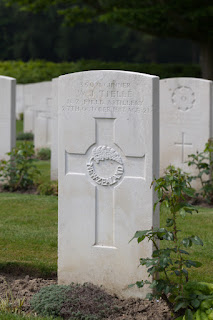 Posted by Vonnie at 4:50 PM 6 comments: Links to this post