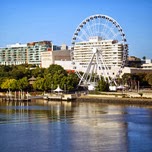 Yes, yes, I don’t blog very often. I’ve never seen the sense in telling the world what I’ve had for breakfast.

But now I have something to say!

Last weekend (October 11-13) I attended the GenreCon Australia conference at Brisbane. Yup. Beside the River Walk. Pretty. And cool, considering the temperatures were up around 30 Celsius and it’s only October. A really hot Spring this year. We genre writers and readers were a vocal bunch, representing predominantly the worlds of romance, SF and paranormal. Or maybe they were the noisier ones.

We heard about the power of genre fiction and also its history. Stemming from the days of Charles Dickens’ serialised novels, this popular as opposed to literary fiction is more than holding its own. It is constantly evolving and that’s the great thing about genre fiction. Rather than looking inward, it is looking outward.

And, and, and…genre fiction is at the forefront of e-publishing, they said. No kidding! Advice re contracts (common terms, reprint rights) and self-publication was dished out generously.

Some writers were given the chance to pitch to publishers’ representatives and agents such as Kate Cuthbert and Alex Adsett. Alex has to be the world’s most pragmatic agent. No high falutin’ rubbish there. She tells it like it is, with her main message being “It’s damned hard out there.”

Most useful to me was the research information from the outspoken suspense author, Dr. Kathryn Fox. Not being a native Australian, I often stress about whether my ideas of the hierarchy and tasks of the special squads of the Australian Federal Police are accurate or not, and Kathryn’s advice on where to look for this sort of information was gratefully received.

All-in-all a great conference and thank you to Queensland Writers (QWC) for their input.