COZIES - ONE OF MY FAVOURITE GENRES (SEE EARLIER POSTS)

Here are some comments from Sam Cheever who writes cozies (and lots of other hotter genres).

What Makes Cozy Mysteries so Popular?What is it about cozy mysteries that makes them so much fun? To answer that question, I guess you need to start with the basic elements of a cozy. When one thinks of a cozy, one might think Agatha Christie’s Miss Marple or maybe Angela Lansbury’s character, Jessica Fletcher, of Murder She Writes fame. The traditional cozy is set in a specific, confined area, such as a bunch of people stranded in a remote location with a killer in their midst, a.k.a Clue (Best. Movie. Ever). Many contemporary cozies are in small town settings, with quirky characters and the challenges and opportunities inherent in small town living. A cozy generally revolves around a murder, but the murder is usually off screen and/or not overly violent.
Cozy mysteries feature amateur sleuths of all kinds. For example, some of the most popular contemporary cozy series feature flower shop owners, chefs, caterers, accountants, book store owners, writers, and dog trainers. These unlikely sleuths find themselves repeatedly embroiled in murder most foul and struggling to figure out whodunit. The mystery is made more interesting by the quirkiness of the people involved, their tendency to lie and cover, and the misconceptions that come from knowing someone for years. It’s a fun formula fraught with opportunities for both the reader and the sleuth to go awry and lose their way.
Which brings me to the reason I love a good cozy mystery. I love the challenge and journey of figuring out whodunit in a light, fun environment. No guts, no gore, no over-the-top sensuality. Just a big, fun puzzle.
My own cozy mystery series is centered on an antiques store owner and has an additional fun twist. Filled with lots of great, old things, Yesterday’s Antiques is a hotbed of paranormal activity, giving Yesterday Mysteries a paranormal edge. This aspect adds an extra element of fun to the already enjoyable mystery. Anna Yesterday is a kind, attractive young woman trying to make a living doing what she loves in a small town in Southern Indiana. When Anna opened Yesterday’s Antiques, she inherited two spirits, who are tied to objects that were once buried under the store.
Joss is a cowboy from pre-Civil war times, whose gun belt and holster were uncovered behind the store when Anna was having some improvements made. Joss is sexy, protective, and obviously in love with Anna, and she feels pretty much the same about him. The second specter, Bess was a saloon girl who sometimes cleaned the floors in the inn that was located where Yesterday’s now exists. She lived in the mid to late 1800s and Anna isn’t sure what her transference object is. Bess and Anna butt heads on a regular basis, mostly due to the fact that Bess is jealous of Anna’s relationship with Joss, but also because…well…Bess is kind of a crank. #:0)
To make things even more interesting, Anna has a sexy, flesh and blood assistant who’s an ex-cop to help her with her sleuthing. Her growing feelings for Pratt are confusing and cause no end of tension between the two men in her life. All in all, it’s a fun series with likeable characters and I’m really enjoying being on the creation side of the cozy mystery genre for a change! I hope you’ll check these books out.

~~*~~
Yesterday’s News: Antiques can be a dangerous business. Especially when you’re dealing with a desperate politician, a sexy ex-cop, and a couple of "spirited" companions. Anna Yesterday owns Yesterday’s Antiques in small town USA. When she finds an old newspaper clipping lining the drawer of an antique dresser, she realizes she’s never heard the ugly story of rape and suicide detailed on the yellowed newsprint. So she starts to dig, and her sleuthing exposes an ugly cover-up that casts the residents of Crocker, Indiana into danger and intrigue, and leaves them with a corpse.

All eBook formatsAll Romance eBooksKindle US
Kindle UK
Kindle CAThreads of Yesterday: A deadly secret is tangled up in Yesterday’s Threads, and Anna is racing the clock to get it unraveled.In 1859, Elisabeth Margaret Nelson traveled to Crocker, Indiana to meet her new husband and start a new life. Her family never saw her again. The story of her death and a heartbroken husband who grieves his entire life is a sad tale for sure. But is it true?
When Anna Yesterday receives some vintage dresses from the local museum, she’s excited about highlighting them at Crocker’s annual Apple Blossom Festival. But someone wants the dresses back, and they’ll apparently stop at nothing to get them—leaving a trail of murder and destruction in their wake.
As Anna and Pratt work to uncover the deadly intrigue behind the vintage dresses, interference of another kind is working its way to the surface. All too soon, Anna and Pratt find themselves neck deep in trouble from more than one dimension—and wondering which will get them first! 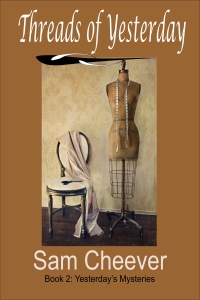