The Finally Ever After Subgenre from Musa

Musa now has another romantic subgenre called Finally Ever After. They are short reads - about 7,000-11,000 words - and are based on the premise of characters with a past history who are being given a second chance.

Below is Sara Daniel's description of her FEA romance novel, Zane's Art.

Finally Ever After: Zane’s Art
By Sara DanielEarly this year when Musa posted a submissions call for a series called Finally Ever After, I jumped at the opportunity. The stories were to be short, happily ever romances about lovers who have loved each other and lost. Now, they have a second chance to create the happy ending they didn’t get the first time.

I love characters with a past history, especially in a short word count. They have instant attraction and long-standing unresolved conflict—the perfect elements for a fast-paced, emotion-packed read. Zane’s Art had all these things coupled with a strong present conflict. The story flowed out of me so fast I knew it was meant to be!

Zane’s ArtHigh school art teacher Julianne Truman's last chance to save her beloved art department from budget cuts is to sell the old sketches that her former boyfriend—and now famous artist—Zane DeMonde drew for her. But is she prepared to let go of his artwork and the last traces of him in her life?

Desperate to save his artistic reputation from the exposure of his early works, Zane returns to the home town he wanted to forget. He accuses Julianne of profiting from his success and demands she take his art off the market and cancel the auction.

Their high school attraction flares back to life, forcing Julianne to choose between the students who count on her and the man she never stopped loving.Excerpt:"Cancel the auction."
Julianne Truman’s head snapped around at the hard male voice. The stapler fell from her hand and cracked open on the floor, as she caught sight of the extraordinary face that went with the voice. Her knees shook as she climbed down the ladder. She hadn’t faced Zane DeMonde in nearly fifteen years. At one time she’d believed he’d be part of every single day of her future.

"Zane, I didn’t expect you to come." She stepped toward him. His black hair was a little shorter than the last time she’d seen him, but at shoulder length it was still far longer than most men’s. Gone were the black hoodie and ripped jeans of his youth. Now he wore chinos and a sharply pressed blue button-down shirt, open at the neck.

The dark storms in his cobalt blue eyes were exactly the same as the day he’d walked away from her. "Cancel the auction. The sketches and painting are not for sale."

She swallowed. "I own them. If I choose to sell them, that’s my business." And it was breaking her heart to part with the only piece of him that she’d been able to hang onto all these years.

"When they have my name on them and you’re getting rich off me, it’s my business."

Getting rich was so far from the truth Julianne would have laughed if her chest weren’t so tight. "It’s an honor to have you back in town." At least her students would think so. Her brother would likely burst an artery. And she—well, she couldn’t even begin to process the mix of emotions she was feeling. "Do you have a minute to talk? I can explain what’s going on."

She hoped he couldn’t hear how hard her heart was hammering or sense how desperately she longed to wrap her arms around him and pick up where they left off fifteen years ago, as if he’d never left her. "Then you know that the arts are at the bottom of the school district’s priority list. To have supplies for the classroom, to restore the school mural, to give my students a chance to explore different mediums, the art program needs an alternate source of funding."

She couldn’t help feeling defensive at his derisive tone. "Yes, and I love my job."

"Do you? Or have you never moved beyond your high school life?"
BUY LINK
http://musapublishing.com/index.php?main_page=product_info&cPath=44&products_id=421 To learn more about Sara Daniel and her work, please visit her website http://www.SaraDaniel.com and blog. http://saradanielromance.blogspot.com Stay connected on either or both of her Facebook pageshttp://www.facebook.com/SaraDanielSaraShaferhttp://www.facebook.com/SaraShaferDaniel Remember, Sara is also only a tweet http://www.twitter.com/SSaraDaniel away.
And here's Sara's bookcover: 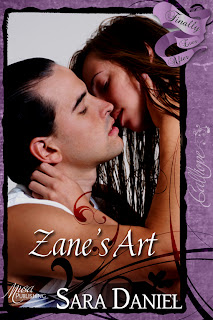 Let us know what you think about these shorter, more intense reads. It seems that many people prefer shorter, quicker reads, particularly those using e-readers. What do you think? Meat and potatoes or dessert? Or a little of both?
Posted by Vonnie at 2:34 PM 4 comments:

Patti is a fellow author from Musa. Her latest book, Moon Over Alcatraz deals with the sorrow and difficulties that a couple go through after the death of their child.

Inspiration Behind the Book

This question had burned in my mind for years and I wanted to write about it. People have asked me how I can write about something that’s never happened to me. I counter with: I write fiction. All fiction writers tell a story they’ve made up in their heads. But they imbue that story with their own feelings. Which is what makes a good book. And I have a wealth of feelings that I used when I wrote Moon Over Alcatraz. I have two children. I know what it’s like to love two human beings unconditionally, with no reservations. My kids often ask me, "Do you love me, mom?" And my answer is, "Always and forever."

So I took a happily married couple, excited to have their first child, placed them in the delivery room, and had the umbilical cord wrapped around the baby’s neck, which produced a still birth.
And that’s pretty much what happened to that couple - their lift stood still. They didn’t know how to move on from there. Instead of looking to each other for solace and renewal, they turned away from each other. Both of them, unbeknownst to the other, dealt with their grief in a way that broke them
apart, instead of pulling them together.

Losing a child is devastating. And each person deals with that emotional turmoil in their own particular way. I’d go so far as to say that no one can predict how they would act in that circumstance. Emotions can be unpredictable, surprising even to the person who’s experiencing them. This is what happens to Brandy and Weston. You have a difference in their emotional upheaval. One character is the mother who carried her baby to term, and the other is the father who didn’t have that same physical experience.

Three days later we were standing at the edge of a hole in the ground at Holy Sepulcher Cemetery in Hayward, the silence so thick, the insides of my ears buzzed like a distant swarm of angry bees. Mr. Peralta and another gentleman stood off to the side while Weston and I held hands next to a tiny casket.
Weston had chosen a simple mahogany box with gold handles, a bouquet of white lilies graced the top of the small box. I knelt down and laid a kiss on the smooth wood then wiped off the tears that had fallen on top. Weston joined me, placing a single red rose in the middle of the lilies.
He helped me up and we stood side-by-side in silence, my guilt over her death like a stone in my empty belly. I missed everything I’d dreamed would be happening right now, yearned for all that could have been.

Weston nodded at the man standing next to Mr. Peralta and our baby was slowly lowered into the gaping maw. She reached the bottom, and a bird landed on the rich brown dirt piled next to the grave. It pecked around, chirping a little song then flew off - as if saying goodbye. My heart squeezed inside my chest. I picked up a small handful of soft dirt. "Goodbye, Christine," I whispered, throwing it on top of her casket. Weston wrapped his arm around my waist and pulled me in close to his side. Why her? Why my baby? Was this supposed to make sense? And, if so, to whom?

We drove home in silence. No words existed to express my grief.

Below are links where you can learn more about Patti.